A smart LG TV is the part and parcel of every home. It gives an excellent display. However, you may face some technical issues with your LG TV. For example, most users complain about a half-black screen on LG TV. One side of the TV screen becomes darker than the other.

In some cases, the half screen of the LG TV completely becomes black. This issue can be horizontal or vertical. The lower half of some LG TV goes black while the upper half is displaying well. This article will guide you that how can you fix the half-black screen of your LG TV.

The first thing you should try is the power cycle. Just turn your LG TV off. Unplug it from the power supply and disconnect all the devices. Wait a minute at least. Now, plug the TV in again. Press the power button and turn it on. 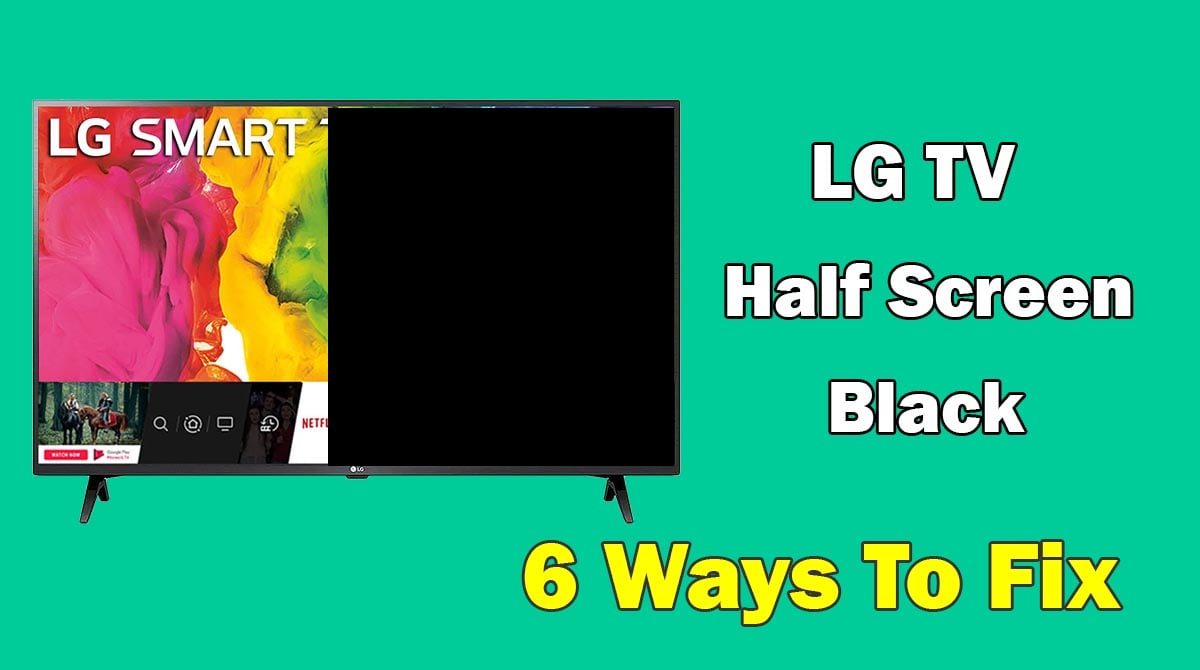 Try changing some settings manually such as the brightness and contrast. The half-black screen issue may be caused by some wrong settings. If it does not work then restore default factory settings on your LG TV. It will remove all the data and software bugs.

Go to Settings and then to General settings on your LG TV. Tap the option ‘Reset to initial settings’. Follow the on-screen instructions and confirm the action. Power cycling and factory settings are the basic software fixes. If they do not work, proceed to the hardware fixes.

There are two possibilities when half of your LG TV screen goes black. You need to examine carefully in order to find out the real issue. See if the left and right sides of your LG TV screen are clearly partitioned by a line. This problem is caused by a defective display screen or a faulty TCON board. It means that images cannot be processed accurately. The fault may be in the entire board or only in one part.

If no clear boundary line exists between the left and right sides then it is due to defective LED strips. The LED strips provide a backlight for the display. You can confirm it very easily. Take a flashlight and throw a light on your LG TV screen. You should see the shadow of the picture on the TV’s display screen. This indicates that your LG TV’s backlight is defective but the panel is okay. So, replace the backlight or LED strips.

Another reason for the half-black screen is failed power supply. The current is not reaching the backlight hence the screen goes half black. There are two possibilities of the low power supply.

One possibility is that the power outlet is receiving low voltage. So, try connecting your TV to some other wall power outlet. Or plug in some other device to the power supply board to check the voltage.

The other possibility is that the circuit board of your LG TV has failed. It cannot transmit the power to the backlight. This problem can be solved by repairing or replacing the circuit board.

The last and rear possibility is the failed panel. Your LG TV’s LCD display panel is defective. The solution to this problem is replacing or repairing the panel.

If you own an older LG TV model then it is better to replace it instead of installing a new LCD panel. However, if your LG TV is new and under warranty then you should contact LG. Otherwise, get it repaired by a technician.

Related: LG TV Turns On But No Sound or Picture

In case of any hardware issue, you need to consult a TV mechanic. The TV LED strips, panels, and boards all can be replaced. We suggest replacing the parts instead of repairing them. Because the repair costs you more than new parts.

Moreover, the repaired parts are not reliable and long-lasting. If your LG TV is bigger than 32 inches then you should go for repair. Because repair cost and labor will be justified. But, for smaller LG TVs, choose the replace option.

Hi, I'm Noor Alam, Founder of HowToFinders.com. I'm naturally inclined towards modern technical gadgets and Love to solve different problems regarding these gadgets. I will share information with you on how to fix different old devices and how to find the best products. You'll find great help from my research and experience.

Hi, I'm Noor Alam, Founder of HowToFinders.com. I'm naturally inclined towards modern technical gadgets and Love to solve different problems regarding these gadgets. I will share information with you on how to fix different old devices and how to find the best products. You'll find great help from my research and experience.