You’ve just purchased and installed your brand new ceiling fan, but you don’t know why it isn’t working right.

What could be the problem? Let’s look at some potential causes of this dilemma and the best ways to troubleshoot them so that you can enjoy your new fan in no time.

When I got a new ceiling fan, God knows what happened to it. I was stunned because I did not know what to do as I was a beginner. Then I tried the following points. Some of them are mentioned below.

If you’ve just installed a new ceiling fan and it won’t start, it might be because your fan has a faulty wiring connection. Check to make sure that each wire is attached to its corresponding screw.

If necessary, tighten or loosen screws until all wires are connected properly. If one or more wires are loose, try repairing or replacing them.

Loose connections may cause sparking, which can damage nearby electrical components and ignite combustible materials such as carpeting. For assistance with rewiring a ceiling fan in your home, contact an electrician near you. 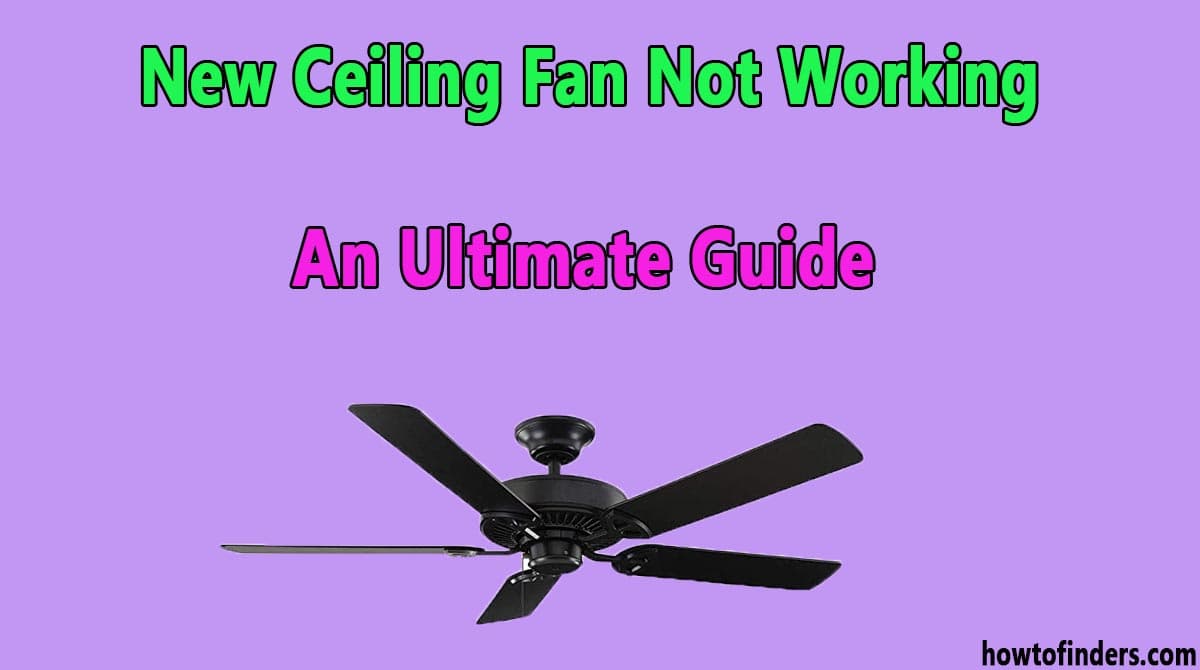 Check The Power Supply and Fuse

Before spending any money on a new fan, take a look at your old one. The most common reason for a ceiling fan to not work is that there’s no power running to it. Check all of your electrical sockets and switches, as well as fuses and circuit breakers in your house.

If you don’t have power going to your ceiling fan’s box, call an electrician who can tell you why. Most likely, if you’re missing a power supply or have tripped fuses or circuit breakers, it will just be an easy fix and won’t require replacing any parts on your existing fan. Unless something has been damaged during a power outage or repair attempt.

The most common reason that a new ceiling fan won’t work is that it isn’t installed properly. Some people assume that they can install a ceiling fan just like they would install any other light fixture or switch and that just isn’t always true.

When installing a ceiling fan, you need to make sure that you are following all of the manufacturer’s instructions. It will be up to code and safe for your family to use.

You should also ensure that your fan has been tested by an independent safety agency. Some fans come with labels certifying their safety, but even if yours doesn’t, it doesn’t hurt to ask about testing when shopping for a new ceiling fan.

If your ceiling fan remote does not work, don’t panic. The issue could be due to something as simple as a bad light kit. Remove it from your ceiling fan and look for a loose wire or bad connection.

Check if you can fix it by tightening loose connections or replacing missing wires. If that doesn’t work, you may need to replace your light kit entirely. Luckily, they’re easy to come by at any home improvement store or online!

The most common reason why a ceiling fan doesn’t work is because of a faulty motor. If it’s not turning on, but everything else seems to be fine, you might just need to replace or repair your motor.

You can check for problems with these tests: Turn on an A/C and make sure that your fan works (many fans are controlled by thermostats in conjunction with A/C units). Pull down on the chains and make sure they move easily without any hang-ups or sticking.

If you find any issues here, consider replacing your motor first before moving on to more complicated troubleshooting. Also double-check that it’s plugged in—even after checking that, we’ve had several people figure out their problem was unplugged wires!

Clean Out Dust From Fan Blades

Dust from your ceiling fan blades can lead to failure of your light kit or fan motor, so keeping your blades clean is important for both performance and safety.

Use a vacuum’s crevice tool to get into tight spots between blades. Note: A vacuum with a brush attachment isn’t effective at cleaning dust from ceiling fans. The bristles aren’t stiff enough to get in between fan blades, and they’ll just push dust around instead of sucking it up.

Also watch this video to fix your fan

When a new ceiling fan doesn’t work as expected, chances are you made one of these mistakes: your wires are crossed, it was installed improperly, or it simply needs to be re-positioned.

To prevent future issues with your ceiling fan, make sure to always use a licensed electrician and follow his or her installation instructions. Happy cooling! 🙂